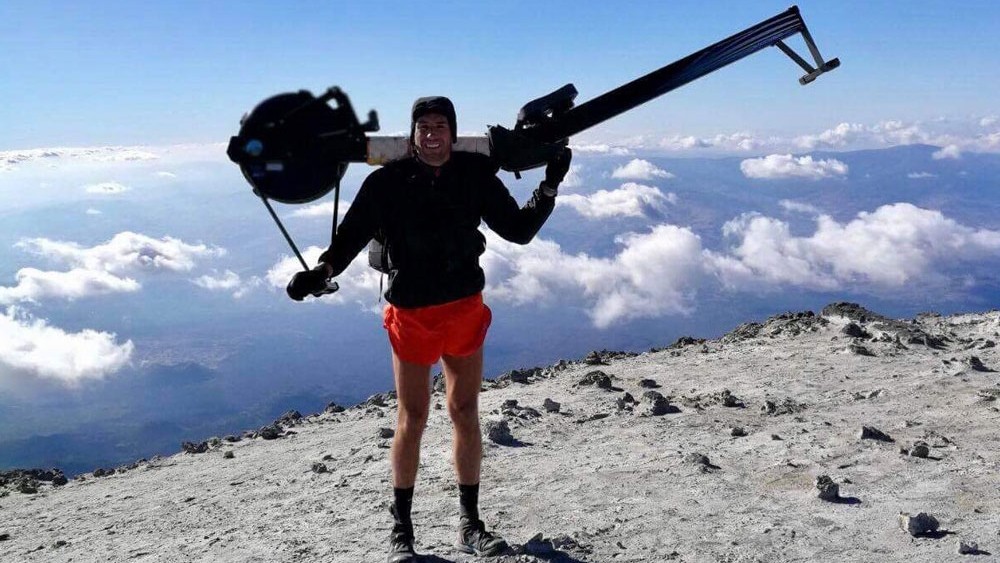 Matthew Disney’s fourth of seven charity fitness challenges in 2019 saw him undertake his biggest challenge yet. On 18 June he embarked on an extreme expedition carrying his 26kg 2.5m unbalanced Concept2 rowing machine 700km in three countries via Britain’s three national peaks to then row the height of each at the summit and finish at the Commando Memorial, having gained more than 25,000ft in elevation during the challenge.

On completion of Disney’s planned 2019 challenges, all donations made will be split between his two chosen charities: Rock2Recovery (a tri-service charity that helps all soldiers – both serving and veterans – that suffer from PTSD and are on the brink of suicide), and The Royal Marines Charity (also helping both serving personnel and veterans, and their whole families in hard times).

His first charity fitness challenge on 15 January at RMR Merseyside saw Disney complete 100 sprints at max speed on the treadmill for 1 hour 40 minutes at sub-5 minute mile speed, covering 167m per sprint over 10 miles (16.5km) in total. This raised a nice starting amount for both charities.

His second fitness challenge saw him at Universe Fitness – Blackpool on 14 February, climbing the height of Everest in under nine hours, covering 58,070 steps/27 miles. This challenge was something close to his heart, and the date was always set in stone as it marks the loss of his very good mate, Fleetwood’s fallen Royal Marine Darren ‘Daz’ James Smith, who was killed in Afghanistan on Valentine’s Day 2009 when they were both there on tour together.

His third challenge saw him run 81 miles (over three successive marathons) straight through the heart of Storm Hannah. This time he managed to find three other former Marines to join him. The route started at RMR Merseyside at 0315 on 27 April. They then linked on to the Trans Pennine Trail to Widnes, through to Warrington, and finally veered off to Hilton’s Beetham Tower, Manchester, before turning around and coming back via the same route. Storm Hannah reduced speed limits on bridges, closed roads, caused destruction to all public transport and kept the majority of the local population indoors. This challenge led to three out of four participants, including Matthew, experiencing the early stages of hypothermia, to add to the long list of injuries, hotspots and niggles.

If anyone would like to support Matthew by walking any distance with him, or by donating, then visit facebook.com/DisneyRM where you can find all the information you’ll need. Matthew’s Just Giving link is at justgiving.com/fundraising/DisneyRM

Matthew Disney is a former Royal Marine Commando, elite fitness enthusiast and global adventurer, often described by those that know him as ‘a highly enthusiastic character that pushes the limits of life and adventure’, ‘ready for any challenge’ and ‘one of those people that make you feel sane’.

He is a truly unique character, retaining his Bootneck (Marine) spirit by diving straight into a number of intense fitness challenges throughout 2019, with the intention of inspiring others, bettering himself and, most important of all, raising funds for two good causes. He will also be inspiring others to set their own challenges, no matter how big or small, and will provide help and guidance to anybody that wishes to get involved.

Rock2Recovery is a registered CIC with a clear mission: ‘to save and change the lives of those in our Armed Forces, our veteran community and their families who are affected by stress. Our approach is to inspire, coach and motivate towards a more positive future.’

The Royal Marines Charity/RMA exists to help the entire Royal Marines family. They are strong believers in ‘Once a Royal Marine, always a Royal Marine’. They offer a range of services to those currently serving and to veterans, from financial assistance to advice on finding a second, meaningful career.

How one training company changed the future of the enforcement industry